Looking back over the past month the first thing that comes to mind is the old Fleetwood Mac song, "Who knows where the time goes?" Hopefully, as we now settle into autumn, life might slow down a little and some sort of normality return.

At the end of August we spent a lovely week in North Wales that allowed me to achieve a long held ambition - a trip to Ynys Enlli, Bardsey Island, the island of 20,000 saints. I'd recently read Fflur Dafydd's great book of the same name and that had redoubled my determination to visit the tiny island just off the tip of the Llyn Peninsula, the reputed burial place of Merlin, perhaps even the Arthurian Avalon. It's certainly magical, but a brief four hour visit can't possibly do it justice - I'll be back there as soon as I can be.

Since getting back there seem to have been wall to wall poetry events - about which I'm certainly not complaining, having missed out on so many over the past eighteen months. One event in particular - although still on Zoom for obvious reasons - was really affirmative. Mike Bernhardt, the editor of Voices of the Grieving Heart, was running a workshop for the American National Association of Poetry Therapy. To hear how valuable therapists have found the book, in which I have some work, was so heartening - to know that poems from one heart can so meaningfully engage with the hearts of others at some very traumatic times.
Another great afternoon was that spent in Ledbury at the Elizabeth Barrett Browning Institute, now home to the Ledbury Poetry Festival. I'd been invited to take part in a project run in conjunction with West Midlands Railways called Poetry on Platforms, a celebration of the lines used by the Dymock Poets a century ago. Along with fellow poets Lesley Ingram from Ledbury, Moya Oatley from East Anglia, Ann Morgan from Ross on Wye and Karen Antoni from Brighton I was filmed reading extracts of Edward Thomas, John Drinkwater and Lascelles Abercrombie's poems. I'm not sure when the film will go live but watch this space.
And on Saturday afternoon, after a very long hiatus, Rik Hool's "Poetry Upstairs" resumed in Abergavenny. A new venue - the Trading Post Cafe - welcomed four quite different writers, two performance poets and two "page" poets. I was very taken with the work of Alicia Stubbersfield; she focuses on such mundane, everyday experiences and illuminates them with such insight, especially those based on her extensive teaching experience. I'm very much enjoying her collection "The Yellow Table" at the moment. And of course looking forward to more Saturday afternoons in the coming months - Poetry Upstairs has had a thirty year run so far and certainly isn't running out of steam!
Posted by Gill at 08:08 No comments:

It was with some trepidation that I drove up to mid Wales a week ago - after depending on the internet for so long, how would an in-person workshop be once more? Well - it was wonderful. Zoom sessions simply can't replicate the experience of sharing a space with like-minded others, chatting over coffee and lunch, working in concert with one another. And the venue - Farmer's Lavender in the hills above Builth Wells - added to the pleasure of the day, though I admit I didn't take advantage of the natural pool in the grounds for a swim, as did some of the braver souls! But Helena Attlee and Emma Beynon facilitated a very interesting and thought-provoking day and it was fascinating to talk to the other participants about their current life writing projects - such a variety of biographies, travelogues, memoirs.

I was back in mid Wales again at the weekend, to at last complete our Wye Valley Walk. It had been a somewhat protracted one - we started it in 2009 and it's only 136 miles long! For a variety of reasons we had had long gaps in between stints. But finish it we have, covering the last seven and a half miles in intermittent downpours - which might explain why we met no more than a handful of other walkers all day! It's the sort of walking I love though - in spectacular wild country, with history beneath your feet (home to Celts, Plynlimon saw the Romans mining lead, Owain Glyndwr routing the English). No wonder artists and writers down the centuries have taken inspiration there.

It's only the first week of August but already it feels as if autumn is upon us - chilly mornings and the evenings drawing in. I'm often surprised and disappointed by August weather although I know I shouldn't be. The Welsh for July is Mis Gorffennaf - from gorffen, to finish, and haf, summer. So I suppose the dubious weather of August has long been recognised as autumn knocking on the door! But one thing that never disappoints over the summer is having a bit more time - getting back to some (non-research!) reading, seeing friends (which, at last, we can now do), taking stock before getting back into the usual September routine.

I've very much appreciated the opportunity to search out some new authors in the last few weeks and to catch up on my poetry reading. Angela France's new collection Terminarchy came out a few weeks ago with Nine Arches Press and that I have thoroughly enjoyed. She approaches the big questions, the serious issues, with a light touch that so effectively draws the reader into the natural world that is hers and ours; she shows us the urgent need to value and protect that world, she reminds us through her friend Sparrow that "no-one can mend / fractured land, no-one can replant ancient". Reading or hearing her work read always reinforces for me how fortunate we are to have her as mentor to our Women Aloud group; her support, suggestions and always constructive criticism are invaluable. 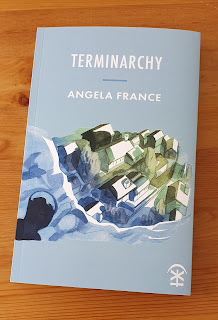 So, the Ledbury Poetry Festival has come and gone for another year - but very successful it was too. Next year perhaps normality will resume with more in person events, but a few of those at least took place this time and the on line ones enabled a very wide audience to enjoy some brilliant poetry. I particularly enjoyed the John Challis workshop I was able to participate in on Appearances and Excavations and the Gillian Clarke and Matthew Francis event in which they read from their recent publications. I have always loved the great Welsh Mabinogion stories and Matthew Francis has retold four of these in tremendous poetry; in Gododdin, Gillian Clarke has transformed the ancient accounts of the battle between the Welsh and Picts and the Angles in AD 600  with a hundred laments for named characters who fought. Word music indeed.

It's been back to the drawing board with the biography I'm working on. Following a couple of meetings in the last week or so, even more has come to light that demands space in the story. Two long treks last weekend - at the beginning of the Three Castles Walk - provided useful opportunities for a bit of reflection on things. To say nothing of prompting ideas for some poems too ... 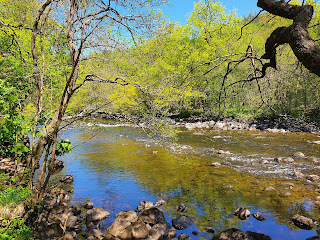 A long gap since that last post - a busy time! We've recently come back after a couple of weeks in Scotland - walking in the Trossachs in the first week and doing a lot of research on the west coast during the second. Late spring is always such a lovely time to visit north of the border - although this time the midges were out in force rather earlier than I've known in the past! But the weather was great and the wild flowers just stunning. I was delighted to be able to get back to Inchcailloch, the uninhabited island in Loch Lomond  I last visited forty years ago and to which I've always wanted to return. There's a magic there I've experienced nowhere else - the sense of history, the quiet woodland, the clear waters, the view from the summit of mountain range after mountain range. A very special place.

But I have come back with something of a dilemma. The trip garnered more information about the subject of my biography than I could have hoped for - but also a lot of information around his life and times, about significant others with a bearing on the story who I hadn't encountered in any way beforehand. I'm still mulling over whether I should change the whole thrust of the book or think about a second publication following on from it. Pros and cons to either approach! But Covid has delayed progress on the project for long enough so I'm anxious to move forward on it now.
But this coming week sees the start of the Ledbury Poetry Festival, one of the poetry highlights of my year. A mixture this time of on-line and face to face events. I'm very much looking forward to the poetry walk on the Malvern Hills next Saturday (and hoping the BBC weather forecast is wrong!). If you haven't seen the programme, do look it up - there are some great events to get to one way or another.

At last! Libraries and archives are slowly re-opening. A major project (a biography) I had to put on the back burner at the start of the pandemic is being resurrected and something like normal service restored. Incredible though the internet may be, for so much research nothing can replace getting out there, talking to people, handling documents, walking the walks that your subject took. And a lot of my subject's walks were along Clydeside and then in the heart of Wales, so I'm looking forward enormously to following in his footsteps shortly.

It's great too that live literature events are beginning to surface once more. A lot of the Hay Festival and Independent Bookshop week events are still on line (some good things to look forward to there though) but I've been delighted to find several posts for upcoming workshops and readings actually in person again. Some are outdoors of course, so here's hoping for a kind summer!

The launch of Voices of the Grieving Heart on Sunday was a very moving event. In addition to reading their poems, the five British contributors and Mike Bernhardt, the Californian editor, told of the experiences that had led them to write - the loss of a child, a partner, a parent, sometimes in very traumatic circumstances. I felt very privileged to have work in such a publication, one that hopefully will perhaps bring something positive into the lives of people experiencing profound sadness. The event was attended by John Fox, the director of the Institute for Poetic Medicine in the States (to which all profits from the book will go); years ago I was at a workshop he ran on a rare visit to Britain and his contribution this time was as inspiring as ever.

Voices of the Grieving Heart 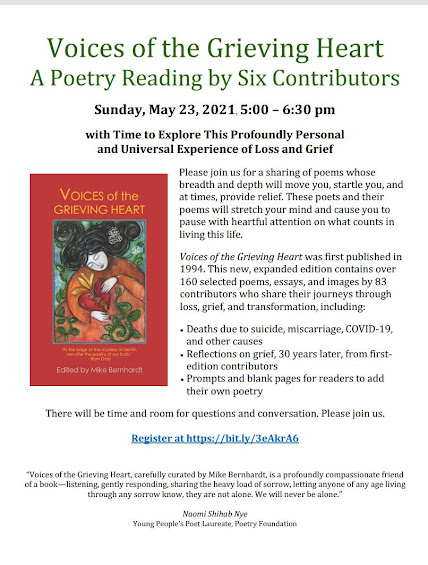 Here's the poster for the launch I wrote about in the last post. If you're free for an hour or so on Sunday May 23rd please do join us (registration details above). It promises to be a very interesting session on a a topic that affects us all at different times in our lives. The book's been very carefully curated by Mike Bernhardt and it's beautifully produced - it's well worth a look at.