Excuse and no excuse!

Following an unfortunate incident in Crickley Hill Country Park yesterday morning (involving several dogs and a wet patch of grass) I'm now the frustrated owner of a splinted left wrist! I have decided this is a splendid excuse when it comes to housework, gardening etc. but it leaves no excuse when it comes to getting down to putting pen to paper ....

Back in May this year I spent a fascinating day at a poetry workshop run by the BlueGate Poets in Swindon at the Museum and Art Gallery there. The tutor was Tamar Yoseloff and we were working from the excellent modern art collection the gallery houses. Shortly both on-line and print anthologies will be coming out with the poems inspired by the day. Here's a preview, with my poem based on Kyffin Williams painting "The Dark Lake", a dramatic portrayal of the landscape around Llanberis in Snowdonia. 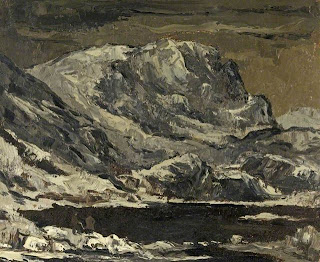 We are interlopers
in this barren place,
hushed by echoes
of quarrymen’s rough shod feet
striking out past
unplumbed silent depths
on grim grey paths
of splintered slate,
the winter morning
numb with cold.

Fashioned from time-worn stone,
moulded by mountain ways,
still in death
they command this land.
Their absence haunts
each cwm. each crag -
and taunts our timorous footsteps
when we trespass in their slag.

The last few mornings have had that autumn feel to them - a chill in the air, hazy horizons over the valley when I walk the dog, a dampness underfoot. I really don't want to see the summer go yet - we just don't seem to have had enough of it - but at least on the writing front there are things to look forward to as a new season starts.

On Wednesday September 4th a new poetry venture - "Well Versed" - is starting at the Muffin Man in Cheltenham  with a mixture of invited guests, music and an open mic. I'm delighted to have been invited to take part in the first evening. Perhaps you might like to come along too - 7-9pm. It should be fun. The following Saturday, September 7th, sees "Poetry In Store" at Waterstones bookshop on the Promenade from 11 -1pm - a variety of poets (myself included) will be reading their own work and that of others. I'm not sure of the date yet, but my monthly poetry group will also be doing a fund raising evening for the Global Footsteps Cafe charity later in the year - watch this space for details of that one.

But the piece de resistance has to be the Gloucestershire Writer's Network evening at the Cheltenham Literature Festival on Monday October 7th! Tickets go on sale as from next week. I loved the event two years ago (when I was a runner up in the poetry competition); that year it was held in the amazing Spiegeltent with its nineeenth century carved pillars, huge mirrors and coloured lighting. Sounds like a more mundane venue this year I'm afraid, but I'm still looking forward to it no end! The winners and runners up in both the poetry and short story sections will be reading their entries, followed by Jennie Farley reading some of her work on the festival theme of "Memory".

Most usefully this week I've received the judge's critiques on my winning entries for the GWN poetry competition and the Onward Short Story prize.  Whilst I know only too well that  I have an awful lot still to learn, it really is very heartening to be congratulated when you have mastered something you've really been struggling with! So both lots of comments (edited highlights below) were most welcome.

"The winning poem is a gem, using as its metaphor a Victorian sampler embroidered by a 13 year old girl ...  during a hard Welsh winter, each coloured thread representing dreams of summer. This memorable poem is as carefully worked as the sampler itself, not a stitch (or a word) out of place." Jennie Farley


"What’s really striking in this story is the strong sense of place and the use of detail from the natural world. There is some beautifully cinematic writing, as though we are watching a film. The story also knows just where to begin and end, which sounds simple, but is one of the most difficult aspects of short fiction to judge correctly. The author also understands the ‘tip of the iceberg’ technique where little details are used to suggest an awful lot more in the reader’s mind. Combining elements of French travelogue, ghost story, and contemporary family issues, this is a rich and well crafted story." Prof. Ursula Hurley

This post is really just to say a massive "Thank You" to the people who have helped me with my writing over the past couple of years, the people who have encouraged me to write, introduced me to different techniques, given such useful constructive criticism; the people who have picked me up and dusted me off when I've been down and who have celebrated with me when I've had successes. When I retired from lecturing I didn't find the transition from academic to creative writing easy and I'm so grateful for all the advice and support I've been given. In particular Rona Laycock's classes at the New Brewery Arts Centre in Cirencester were fantasic for me and lately the sessions I've been attending with the poet Jennie Farley have moved me forward a great deal.

What has made me especially aware just now of all the help I've been given has been the news that, in addition to winning this year's Onward Short Story Competition, I've also won the Onward Poetry Competition - I'm still recovering from the shock! But I know that so much of the credit goes to Rona, Jennie, my Ty Newydd tutors of the past two years (Lavinia Greenlaw, Paul Dodgson, Victoria Field, Nigel Jenkins, Paul Henry, Tom Bullough) and others I've been fortunate enough to do occasional workshops with. To all of you - a huge "THANK YOU!"

This is the poem with which I was fortunate enough to win.

Fluent at six
You read as if
By instinct,
Concentrating
For hours,
Cocooned within
Your world
Of words.

“A gifted child”
They said.

But to spread
Your wings,
To interact,
You must read
Between the lines,
Decode the syntax
Of expression
Interpret posture,
Gesture, space,
Leaf through the pages
Of the human face.

Not yours
The gift that
Makes for
Easy friendship,
Give and take,
Acceptance by
The crowd.
Such literacy
A mystery to you –
A lesson
To be learned
Piecemeal
Over years.

Easier by far
The comfort of your books. 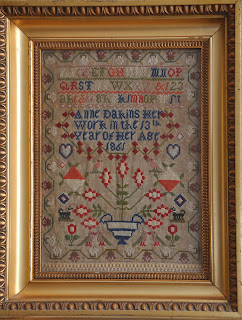 Who would have thought that I could be so indebted to a twelve year old girl from a hundred and fifty years ago! This is a photograph of a tapestry that hangs in our living room, worked by my husband's great great grandmother. For the Gloucestershire Writer's Network competition this year the theme was "Memory" and I submitted a poem entitled "Retrospect : Anne Dakins, her work, in the 13th year of her age, 1861". I could not believe it yesterday morning when I heard that it was chosen as the winning poem. I shall be reading it at the Cheltenham Literature Festival in October.

The news finished off a perfect week for me. The "Gaining Confidence" course at Ty Newydd enabled me to do just that. It was a thoroughly enjoyable, stimulating few days with tutors who took a real interest in student's work and presented lively and thought-provoking sessions. We were a very mixed group - in terms of age, background and writing styles - but, as always, I learned a lot from the other students and their approaches too. Four days is never long enough though - I'm already planning next year's trip!
Posted by Gill at 14:07 No comments: